Mom’s Stuff:
First off, my sincerest apologies for taking over a month to post. September was a whirlwind of getting back to work while the G-man and LP settled into a routine. This weekend we had grandparents and LP’s aunt here to help us, so the G-man and I have gotten a chance to breathe (and sleep!!) This is also the first weekend where I haven’t brought oodles of work home, and it is nice to have a chance to just focus on baby and family for a few days. The shift from stay-at-home mom to “working” mom has been easier than I might have thought, mostly thanks to the G-man for taking over the home duties. Dinner’s get cooked, baby is taken care of and laundry gets done, all of which thoroughly impresses me. However, there have been several adjustments I have had to make both to adjust to my mom-away-from-baby role and in the teacher-with-a-child-role. One of the biggest adjustments has been the fact that the school year started the same way it always has – things are crazy, busy and I spend a lot of time at (and on) work. None of this is a total shock, but what is bizarre to me is the fact that school proceeds as normal while my life is completely different than it was just a year ago. Don’t get me wrong; every co-worker, student and parent is supportive of the fact that I am a new parent. But it is strange to be in the same environment I have always been in as a teacher, but to have totally different home responsibilities. My sense of what it means to be a good teacher has always included building in time for reflection, staying late at work both to help students and to avoid bringing my work home during the week and taking time to talk to and collaborate with colleagues, as well as to complete all the other day-to-day responsibilities of a teacher such as lesson planning, grading, calling families, etc. My home life and relationships with my spouse and family has always been important to me, but I am now realizing that I also was able to put those responsibilities in the backseat for the first part of the school year. Well, no longer. LP can’t go in the backseat, nor do I want him there. He is growing up too fast for me to miss out on a week with him because I stay at work late. Even if I wanted to stay later, I couldn’t because I am still trying to nurse him whenever possible, and that means I have to be home by 5:30 at the absolute latest. Between that and the fact that I have to pump whenever I have spare time and space, I have barely seen some of my closest work friends this year and I certainly haven’t had the ability to collaborate with them. I spend at least fifteen minutes a day trying to figure out which work to take home (since I don’t want to have to carry too much on my bike) and I save up all my grading for the weekend. Added into this is the fact that, in the back of my mind, I know that I am now providing the sole income for my family. I’m not really worried about it, but it does change my perspective on my job, and it is a bit of an added weight on my shoulders. All of this is not said to complain, but instead to attempt to articulate the sort of bizarre world I find myself in at work, where everyone and everything is just the same as I when I left – it’s me who has changed so dramatically.

LP’s Stuff:
LP has been doing all kinds of crazy stuff since my last post, and I’m determined to start posting again every week because that is the ONLY way I can keep up with him! He is both crawling and pulling himself up to standing whenever he gets a chance. We recently opened up his “area” and now our living room has been converted to the baby room. He has toys, puzzles and books to play with and he will entertain himself for quite a while on his own, and even longer when he has an audience in the room. This has really helped the G-man since he is no longer stuck in baby-jail all day! LP is still doing well with naps, all though he has been out of sorts a bit this weekend. But, we think this might because of an exciting new development – LP’s first baby tooth! He is a sharp little tooth coming in on the front of his bottom gums, and he is using it to chew on all things, including mom and dad. He still enjoys chewing our apple cores, but now he is able to scrape off some yummy fruit! LP has also expanded his dining repertoire quite a bit. He is enjoying new textures, especially when we put crumbled tofu in with his baby mush. He sometimes gets to eat what mom and dad eat when it can be mushed, like sweet potatoes fries, tofu scramble (his personal favorite) and quinoa. He definitely likes added spices to things, like tofu scramble with cumin and allspice in his sweet potatoes. He also drinks water from a cup and he lets you know when he is done by blowing bubbles. We are all enjoying him developing his palate, and we are really looking forward to the day when most of the tofu we put on his plate ends up in his mouth instead in his hair. 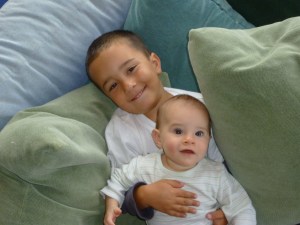 LP and his cousin 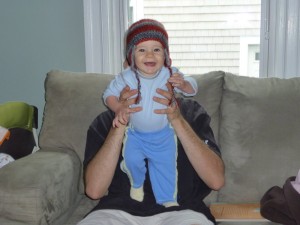 It doesn’t get cuter than a baby in a hat and pants! 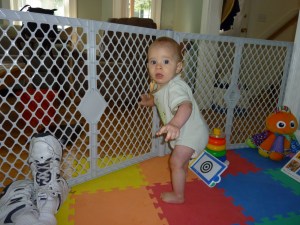