I’m incredibly lucky to have my amazing husband also be a stay-at-home-dad. But he works his butt off, and so do I, both as a mom, and in my full-time bread-winning role (by the way, there has got to be another name for that. I mean, come’on. I barely buy bread, let alone win it!). I often feel a like I would like to talk to more women in my position. I have read some stuff about life from the stay-at-home-dad, or about working moms where both parents work outside the home. And I sometimes feel like a total whiner when I start to feel like my life is too hard – because I have it soooo much better than most people. I would love to talk to more moms in my situation if they are out there. I feel like I would like to talk to others who have navigated the mom/breadwinner role and hear their thoughts – not for answers, but just someone else to validate the thoughts and feelings I have.

LP’s Stuff:
LP had a great time at his first birthday party last weekend. He enjoyed a huge cupcake (all for him!) and running around with some really great “big” kids. Of course, to be fair, almost every kid is “big” to him. He also had a great time with his aunt and her awesome roommate! They did a good job keeping LP busy all weekend! LP has figured out how to give hugs, and he is having fun with it. When he and the G-man went to Together in Motion LP went around hugging a bunch of kids. The only problem is his “hugs” often start from behind the kid and involves his arms around their neck. He means well, but it isn’t the most effective way to approach someone. Luckily, he also gives people great hugs from the normal way, which his dad and I are enjoying immensely!

LP is learning to communicate with more than hugs. He has learned the sign for “more” which is great at meal time. Unfortunately, he thinks it is the sign for “gimme what I want” and uses it whenever he wants something that he can’t have (chocolate chips, dad’s wine, a knife, etc.) In his defense, that meaning makes as much sense as “more” from his experiance of the sign (where he makes it, we applaud and then give him more of what he wanted). So, we’re working on clarifying the meaning for him.

Food:
LP continues to eat what we eat, and a lot of it! He chowed down on two pieces of vegan pizza from Peace ‘O Pie last week, and over the weekend he enjoyed toast, cupcakes, lentils and numerous other goodies. This week he has enjoyed dinners of risotto, lentil/orzo soup and he continues to follow his routine of blueberry baby mix in the morning, followed by avocado and veggie dogs or tempeh (sometimes with some miso soup thrown in) for lunch. 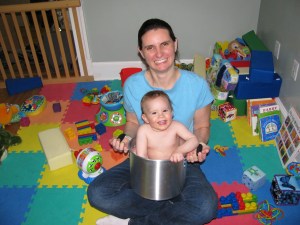