Mom’s Stuff:
Tonight was one of many nights where we had a rough time getting LP to chill out and drink his milk before bed. There are many strategies we have in arsenel: letting him grab the sippy cup, giving his stuffed sloth bear some milk first, walking around and letting him drink while we tour the house, etc. I had tried employing all these strategies to no avail. But then the G-man (superdad!) came to the rescue and managed to get LP to wiggle less and drink more.

I’m really fine with the fact that LP prefers the G-man in some situations like this. It makes sense – the G-man gives him his pre-nap snacks 99% of the time. But it still makes me a little sad since I used to be the one to cuddle and calm down with the little guy when I was nursing him. It’s kind of strange to think back about it now. When I was working and nursing I was exhausted all the time. I hated pumping and then getting home from work, scarfing down dinner, and then nursing again. At the time I often wished that someone else could take over the feeding duties, at least once in a while. So, now I’m just trying to appreciate that I have a little bit of freedom. And hey, I fed the little guy at night for the first 13 months of his life – the G-man can be in charge of them for another 13!

LP’s Stuff:
One of LP’s favorite activities is dancing. He loves his Barenaked Ladies CD Snacktime. Recently he has figured out how to turn on the CD player, and when he wants to dance he runs over, presses play and then starts dancing. He also gets a BIG grin when the music finally kicks in. Hopefully he will get his dad or his grandpas’ taste in music! 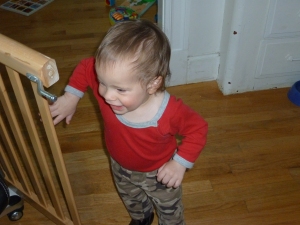