There are lots of rules in our house. Sit at the table when you are eating. Don’t stand on the printer (yes, this had to become a rule). And of course the ubiquitous “follow directions.” But as LP gets older and I find myself wanting him to understand the principles behind the rules. We eat at the table because running around the house with food in you mouth is a choking hazard. We don’t stand on the printer because it could break. And there are tons and tons of other things I tell you to do when we are out in the world because, well . . .

I don’t want you to act like an asshole.

I suppose if I were to be more eloquent I would call this something like “building empathy.” But, come on. Why do I tell my kids they can’t run around the store and get in people’s way? Because that is an asshole thing to do. Why do they need to say “please” and “thank you?” Because I don’t want them to be a rude and demanding asshole. 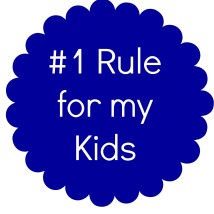 We all have been the recipient of someone else’s asshole-ness, and we have probably displayed some asshole tendencies ourselves. Fundamentally, I think we slip into this problematic role when we are too focused on ourselves and start to feel like our needs supersede the needs of others. I’m not saying that I want my kids to always be self-sacrificing. But I do want them to be aware of the way their actions affect others, and act accordingly.

So when I tell my kids what they can and can’t do, I try to explain why. Lately I’ve been telling 5-year-old L to look around him and see what other people are doing so that he can start to think about how his actions might affect those people for good or for ill. I’m trying to help both kids think about the “golden rule” and how they can treat others the way they want to be treated. I know these are important lessons, and I just hope they internalize them rather than behave “well” purely to avoid a punishment.

And maybe someday, when they are much older, if they start doing something overly rude, or arrogant, or problematic, I won’t have to launch into a whole explanation of why that behavior is unacceptable. Maybe all I will have to say is: